Hey fellow journeyers. I was out for a week, but alas, I have returned and am pleased to announce that I have completed my first book of the year! I have just finished book 10 in the Series of Unfortunate Events; The Slippery Slope. And a it is technically considered a children’s series, I am still proud of the achievement.

Today, I will be writing about one of the things I love to do best… recommend books! If you are like me, you enjoy reading book reviews and researching what to read next. If you are also like me, you like to purchase books, pile them up and read them slowly -perhaps even four at a time. Following this, you then proceed to buy more books. For me, it is a never-ending cycle, but one which shall only aid in achieving my personal goal; to amass my very own extensive home library.

For this week’s post (Part 1), the book recommendations that I give will revolve around fiction, my favorite genre. Sometimes, I enjoy escaping the monotony of the real world through books. I don’t know how to explain it, but when I read there comes a point where the words begin to fade and what I am reading becomes a movie in my mind. It’s pretty amazing!

So here I will share a few of my personal favorite book series, starting with, drum roll, please…

*Quick disclosure: The photos for the items below are each linked to Amazon.com. Should you choose to purchase from them, I will receive a small commission at no additional cost to you.*

When first I began to read Harry Potter I was on summer recess in high school. Interestingly enough, I began the series contrary to its intended order, whereas I read book five first. I had previously watched movies one and two so I had a bit of information as to the plot. However, starting five books ahead proved a bit confusing, though engaging nonetheless. Fast forward a few years later and I am gifted the entire series for Christmas by my older brother. I can now say I have read all the books, in order, and it only taken a year and a half, ha!

Oh, how I love the Harry Potter series. The author, JK Rowling, did an amazing job of developing an entire universe with profound lore and complex characters. It truly is a magical series, fantastic in every sense of the word. I can go on and on about it for days but rather than babble, I would just suggest you borrow or sample the books so you can experience what I am talking about. Seriously, you won’t regret it. In fact, you will probably end up buying them in short order.

And if I may add, sure the movies were great but they do not, by any means, do the books justice. Nor do they hold a torch to them in my opinion.

A Series of Unfortunate Events

Yes, another series I began reading outside of its intended order. Let us just assume that’s simply the way I do things. Throughout the series, you will follow the story of three orphans whose parents were killed in a fire, all while the menacing and evil Count Olaf desperately seeks to rob them of their rightful inheritance -sowing misery and misfortune all the way through. Little did they know, there exists a secret society that constantly helps them escape Count Olaf’s treachery.

This series also has television adaptation with a few seasons on Netflix, the latest of which they have just recently released (season 3). I refuse to watch it until I am finished with the books -this, to avoid any unnecessary spoilers. Still, I must admit, the TV series is quite enjoyable though slightly reconstructed, presumably to better appeal to viewing audiences. However, to be fair, I have not yet finished the book series *gasps* (although I am a mere three books shy of doing so) and thus have yet to decide which is better.

Finally, a series I actually began and concluded chronologically. I do not know about you but I love dystopian novels. Perhaps it’s because I have accepted that the world isn’t perfect and will never be -this theme reflecting that reality. Now I’m pretty sure that almost everyone has watched the films and they are great. However, allow me to submit that is a book series that will keep you guessing and that is jam-packed with action and suspense. It also has a captivating love story for the hopeless romantics.

Katniss Everdeen lives in a time where the higher-ups find amusement in watching people slaughter each other. They have divided the country up into districts, all of which with varying degrees of poverty and struggle. Thankfully this corruption is destined for its own demise as Ms. Everdeen swoops to change the game. How, you might ask? For that, you will have to pick up the books and find out for lf! Needless to say, the books differ significantly from the movies.

What can I say? The former Criminal Justice major in me loves the law and the concept of justice. The Lincoln Lawyer provides me with a much-needed fix of both. Each book takes you through the life of defense attorney Mickey Haller by chronicling a series of criminal court cases -each one different from the last.

What I particularly enjoy about them is that each book contains a unique though interrelated plot with its own set of psychological and moral dilemmas that are neatly resolved at the end, just the way I like it. I easily get caught up with Mr. Haller and feel as though I am in the book following him around as he works to figure out a way to defend his client, even when he believes the individual to conceivably be guilty. Although the series is technically fiction, these plots have remarkably realistic elements to them.

The first book in the series was adapted into a movie where Matthew McConaughey plays defense attorney Mickey Haller. However, I have not seen the film and therefore have no opinion.

Never has a series made me feel as many emotions (and all at once) as the Divergent series has. Here we follow the story of Tris, a young woman who is sorted into one of many factions that individuals get sorted into based upon their personalities, attributes and etc. No one is allowed to show the potential to be in more than one faction, and yet the few who do pose a danger to the way their society is organized. Tris (and I hope this is not a spoiler) turns out to be what they call a “divergent” and this leads into a series of action-packed events that will revolutionize the way that society is run. Definitely worth checking out. There are movies for this series as well and that is all I will say.

There is a bonus book to this series titled Four, a definite “must-read” after finishing the series. It gave me “all of the feels.”

Although I do love reading my fiction books, I make sure I devote my time to God’s word also. As the late but renown theologian, Charles Spurgeon once said:

“Visit many good books but live in the Bible”

My next two book recommendation posts will take us to a more practical set of books concerning spiritual growth so stick around for those and the other recommendations to follow. I have quite a few planned for you guys! 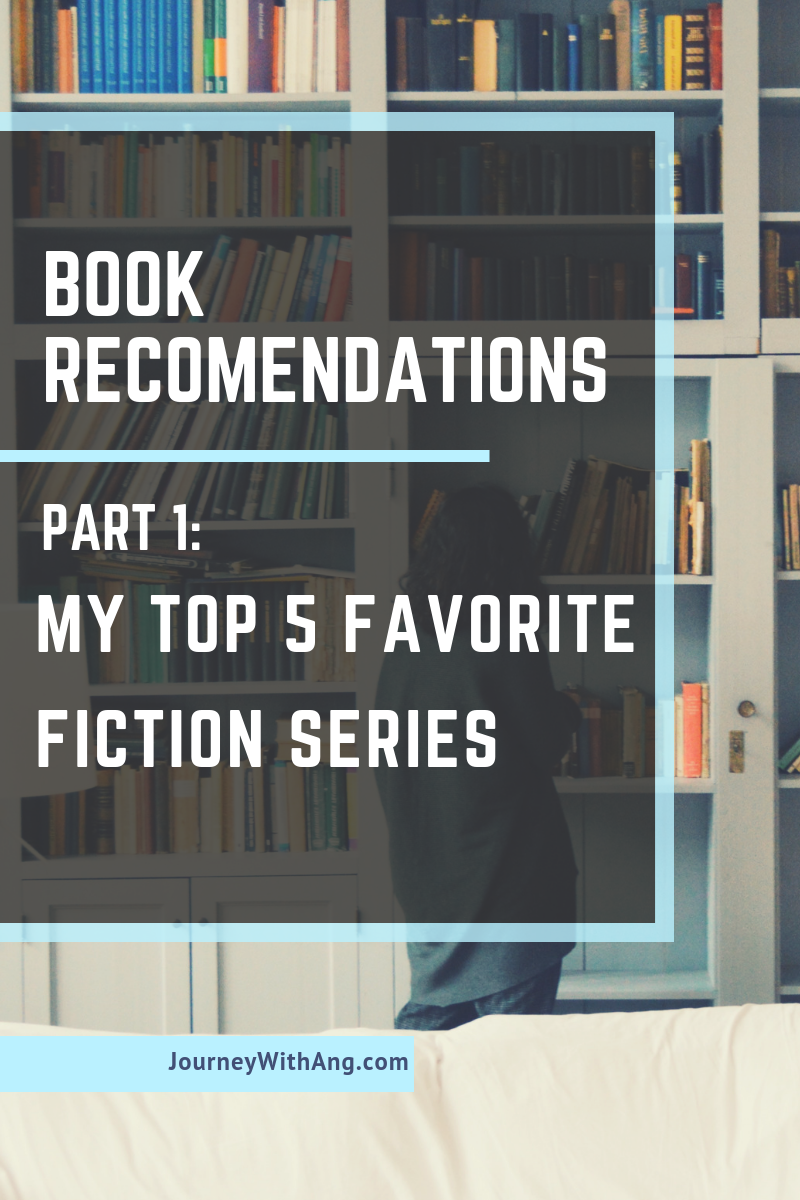